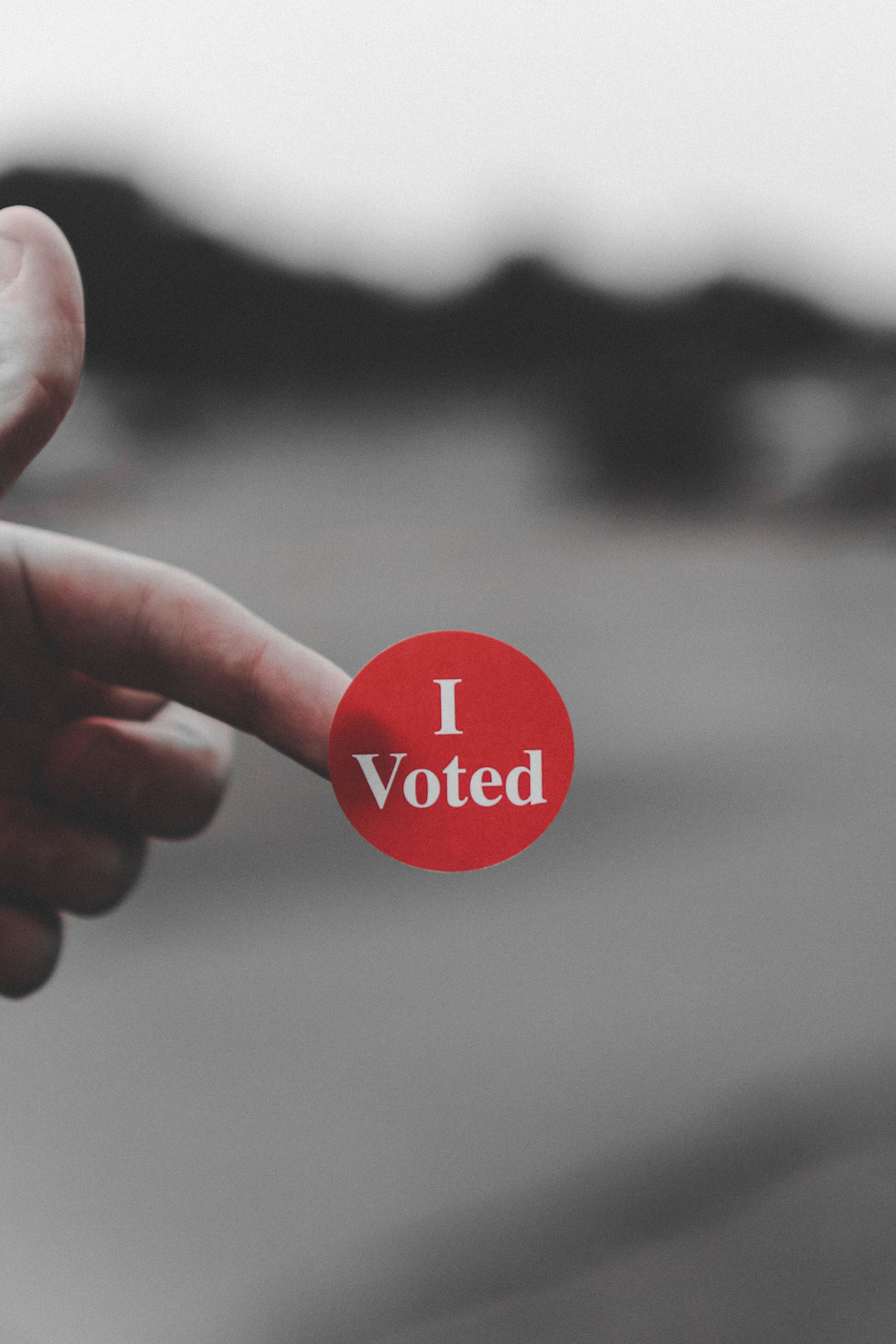 As you prepare to vote—or as you reflect on the choices you have already made—let me share an important perspective on the election.

After the last few elections, we’ve heard some disappointed folks saying things like, “Oh well, God is still on the throne,” or even “So be it. God’s will be done.” It strikes me as perplexing that some could automatically consider our nation’s choice for president to be in line with God’s will—as if simply because something happens, it is the will of God.

Is this the definition of God’s will? “Something that happens?” Surely not. For we know that it was against God’s desire that Satan rebelled against him. That is was against God’s desire that Adam and Eve eat of the fruit from the Tree of the Knowledge of Good and Evil. Likewise, it is certainly God’s will “that none should perish” but even so, many whose rebellion consumes them will one day be released into fires of hell—a place of their own choosing—where the fires of torment will never go out. And so on.

I imagine Romans 13 is the passage people are thinking of when they speak of elections being governed by God’s will. Verse 1 tells us that God appoints all government, and for this reason we must conclude that each president elect is chosen divinely, according to God’s will, yes? To say different would suggest that God is not in control—that something or someone may have the power to supersede his desires—to steal his ability to construct the world he desires—to have his way—his will.

I disagree. And so does scripture.

This is where we must begin to see beyond the obvious. Most often when things in the Bible seem to contradict, it is because God thinks, speaks, and acts differently than we do. He created us to be like him, but we too often settle for the lies of the enemy—which seem so good and so right. Yet we must ask the Holy Spirit to open our minds—to give us supernatural discernment—that we might see clearly, as he does.

What if it is possible for an event to occur that is not God’s divine will, but that can still be ordained in a sense—or allowed, or even warranted—by God, as he permits man’s free will to unfold?

We do know, of course, that God will ultimately have his way—that his will, his desires, his plans will come to pass. “From eternity to eternity I am God. No one can oppose what I do. No one can reverse my actions.” Isaiah 43:13

Even so, I want to share two quick examples with you that may help us understand God’s ways a little better. How oftentimes God allows us to get what we want—even against his own desires—and certainly at our own expense.

Psalm 78 is the recounting of the Israelites great exodus from Egypt. It details the crossing of the Red Sea, the cloud by day, the fire by night, the water that gushed forth from the rock, the food of angels that fell from heaven, and finally the quail God released on the south wind. As the Psalm pauses to highlight the heavenly delivery of poultry, we learn something critical about God. We learn that God will sometimes give us what we crave even though it is against his will and then will punish us even after providing that which we desired.

27 He rained down meat as thick as dust—
birds as plentiful as the sand on the seashore!
28 He caused the birds to fall within their camp
and all around their tents.
29 The people ate their fill.
He gave them what they craved.
30 But before they satisfied their craving,
while the meat was yet in their mouths,
31 the anger of God rose against them,
and he killed their strongest men.
He struck down the finest of Israel’s young men.

32 But in spite of this, the people kept sinning.
Despite his wonders, they refused to trust him.
33 So he ended their lives in failure,
their years in terror.
34 When God began killing them,
they finally sought him.
They repented and took God seriously.
35 Then they remembered that God was their rock,
that God Most High was their redeemer.
36 But all they gave him was lip service;
they lied to him with their tongues.
37 Their hearts were not loyal to him.
They did not keep his covenant.
38 Yet he was merciful and forgave their sins
and did not destroy them all.
Many times he held back his anger
and did not unleash his fury!

Notice verse 29. “The people ate their fill. He gave them what they craved.”

We clearly see from this passage, that God not only permits men to do evil but at times actually helps them along—giving them what they want—against his own desire—and then punishes them for it. Punishes us for it.

Hold on. This is not the case of a “big, bad, mean ol’ God”. If that is what you see, I ask that you pray to have your spiritual eyes opened. It is truly ironic that men beg and plead for their own way, and then when God grants it—even helping us along with it—we can’t believe the horror. How could God stoop so low as to nudge us in the wrong direction—at our own asking?

Because he loves us.

Can’t you see? God doesn’t punish us out of spite or for pleasure, but to gain our attention. So that we might be saved. We are so thick-headed that often God’s best choice—his quickest path to his perfect will—is to allow us to have what we want so that we can experience the inescapable consequences of our own lustful desires.

Some people have to learn the hard way. Unfortunately. But at least they are learning! Some refuse to learn at all. Yet God will do whatever it takes to help us see the folly of our own desires. So that he can bring us back to himself. Even if he must allow us to experience the bitter taste of our own selfish choices.

Another poignant example of this approach—and the focal scripture for this blog—is the passage in 1 Samuel 8 where Israel asks God for a king.

Here, Samuel was the leader of the people in the form of a judge. His sons were in line for leadership over the people, but they were corrupt. So Israel requested of Samuel that he appoint for them a king. Of course, Samuel was upset by this request, and so he did what all leaders must do. He brought it to the Lord.

God responds. “Do as they say, for it is me they are rejecting, not you. They don’t want me to be their king any longer.

God’s plan all along was that he would be Israel’s king. See 1 Samuel 12:12-19. But as history continues to show, his people repeatedly desire their own way—at the expense of their own fortune and a close relationship with God. And God does allow this. Against his own will.

God reminds Samuel to warn the people solemnly. To remind them that an earthly king will treat them poorly, harshly. That if they choose this path, there is much trouble ahead. For this king will undoubtedly draft their sons into the army, steal their daughters to be his wives, take their fields for his own use, and even consume much of their livestock and crops. 1 Samuel 8:10-18

WOW. We want to be like the other nations. The very nations that were in every way opposed to the good and perfect nature of our God. Full of corruption. Full of rebellion. Full of lust. Full of self.

Sounds a bit like Romans 1:28. “When they refused to acknowledge God, he abandoned them to their evil minds and let them do things that should never be done.”

Yet we are so sure of God’s control that we assume incorrectly that the choice of our nation’s leader is automatically in line with his will. Clearly, it may not be. According to scripture.

God did not want Saul to be king. 1 Samuel 15:11 clearly says that God lamented making Saul King. Why? Because he is a control freak? No, because he made us to have direct relationship with him—that he might lovingly provide leadership and justice for his people, without the harsh and oppressive rule of man.

Truly, we’ve never heard more moaning about two candidates than we’re hearing right now. I’ve heard them called clowns, criminals, bigots, and worse. Yet, ironically, I’ve recently heard it preached that when God is getting ready to judge a nation, he gives them the leader that reflects the nation.

WOW. Think about that.

And so, as we navigate the next few days in our nation’s election history, let us do so with fear and trembling. Let us not simply ‘vote our conscious’. But let us vote according to biblical virtue, if at all possible. And if the chips fall, let us not be so quick to say, “Oh well, God’s will be done.” Let us fall to our knees and seek him.